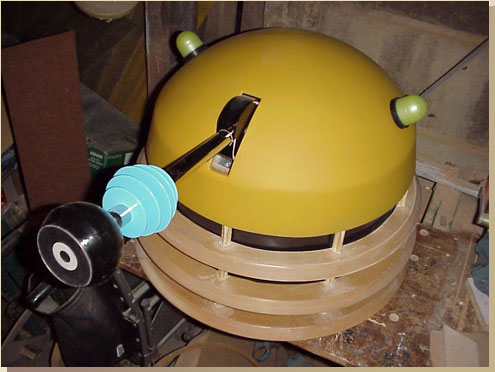 The dome being test fitted to the neck section

At this point, the dome and neck are 'bare'. The dome has been given a good coating of 'spray putty' to fill up any small defects. You can also see the filler used around the neck struts. The eye and dome lights have been temporarily added for reference purposes.

More work needed to be done on the pivot mechanism for the eyestalk. The black paint on the eye pivot has rubbed away because the pivot fits too tightly in the eye slot. Better to get this sort of thing fixed before the final painting takes place! 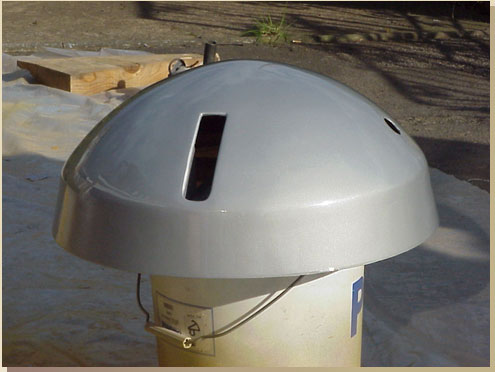 Dome after a good deal of finishing

The dome (gel coat/fibreglass) was cast using a plaster mould, as per the Workshop Manual.

I managed to get two domes from the plaster mould before it was too damaged to use. The dome edge was trimmed with a sharp knife while the fibreglass was still 'green' (soft enough to cut). A great deal of time was spent getting a good finish.

Spray putty (see the previous picture) was used to fill any defects and then came lots and lots of wet-n-dry sandpaper (used wet). Note that I've opted for a 'rounded' bottom to the eye slot. This pays homage to one particular dome from the 1960s. 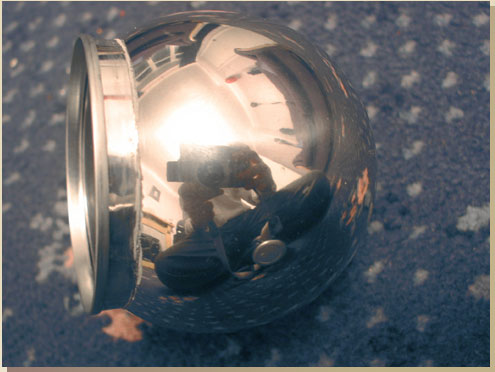 What have we here?

Well, it's the beginnings of an eyeball, made from a stainless-steel sugar bowl. These sugar bowls were available from branches of Wilkinsons and Matalan (in the UK) throughout 2002/2003. You might still come across one.

The first job was to 'wiggle' the three small feet off the main assembly and fill the slight indentations to achieve a smooth surface. Next, the top part of a baked bean tin was glued to the front using epoxy resin. A little filler has been added to the seam to finish the job. The inner lip of the bean tin makes a great 'flange' for holding the iris assembly in position. 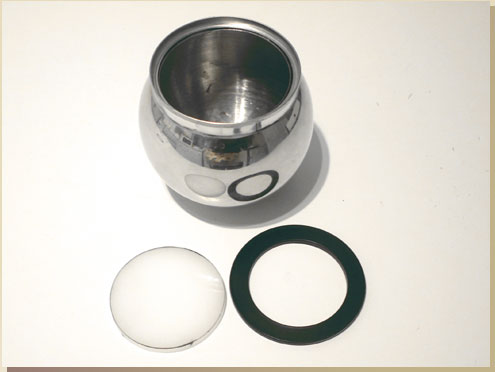 Time to cut out some Perspex

Here you can see the rim of the iris and the opaque white disc that has been cut for the centre.

This is going to be a 1960s style eyeball, so no pupil will be added. Using just these pieces, glued together, will give you a good-looking iris, but I wanted to go a stage further.

I wanted to give the eye some 'depth', so I added a clear Perspex front and a spacer behind the rim. For details, continue to the next page. 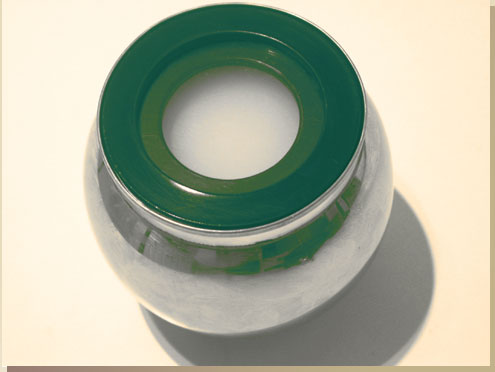 As the picture shows, the 'white' of the iris is set back slightly, so the rim casts a shadow, giving a better illusion of it being a 'seeing device'.

All the rims and discs were cut using a hole saw set, mounted in a drill press. Where the correct size hole saw was not available, the part was made over-size and then sanded down by mounting and spinning it in the drill press. 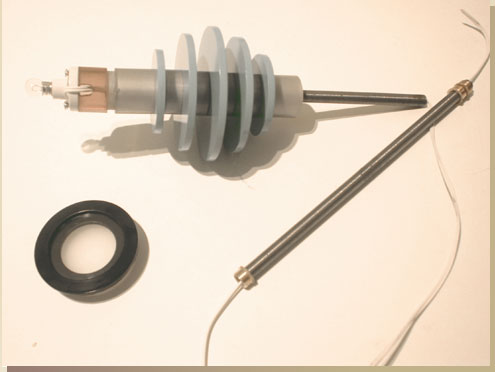 This was also made from Perspex, using the hole saw set. A length of plastic tube (sprayed silver on the inside) has been used to make the spacers between the discs.

The central rod is made up of two lengths of 'threaded tube' (used in the production of table lamps). This tube is ideal for illuminated eyestalks, as it gives you the perfect way to run a cable through.

The plastic 'buffer' and bulb holder are detachable, to allow for future access to the bulb, which is going to be inside the eyeball. 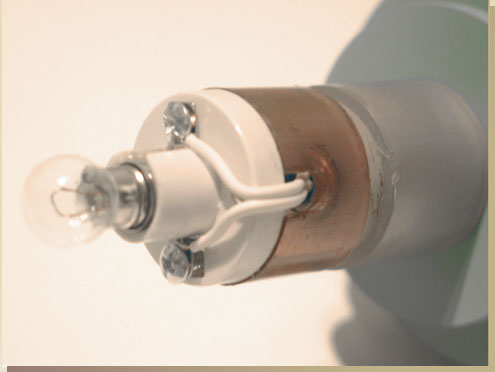 This lamp assembly is made from various bits of plastic with the bulb holder glued to the end.
A brass retaining nut has been glued into a hole in the underside of the assembly.

The whole assembly can be unscrewed and then replaced, once the eyeball has been added.
The wire is channelled up the central threaded tube and then through the brass nut. A small notch has been cut in the bulb holder to allow the wires to connect to the terminals.