You don't have to build Daleks in the real world to be part of Project Dalek. Many of our members build their Daleks virtually, as computer models which are then placed in various virtual environments to create dramatic scenes.

The computer models they use are often built using the standard plans as reference. However, some of our members like to experiment and branch out, modifying the plans designs, creating Dalek variations of their own. 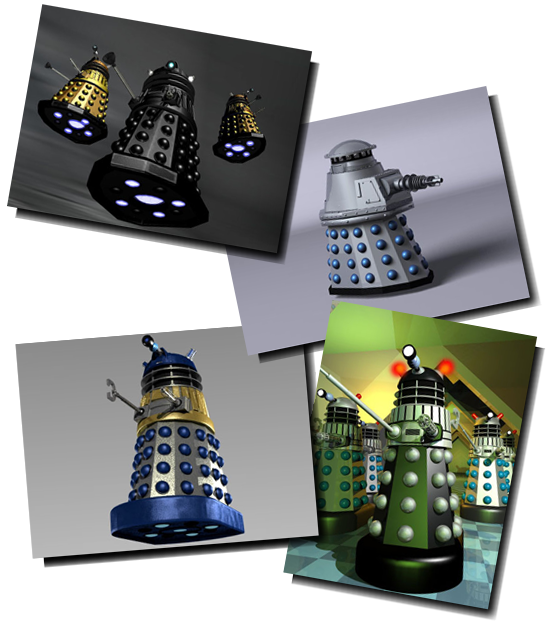 In some cases, these computer-generated Dalek variants have then been used to create new sets of plans and reference, which is then used by the 'real world' Dalek builders to create actual, full-size versions of the designs. A good example of this process is Dalek STORM, which was designed by Project Dalek member, Mechmaster and built by former moderator Alansdalek. Mechmaster also created the MK6 Dalek CG model, which was subsequently used to create a set of plans (available on the Forum), which subscribing members can use to build this design as a full-size prop or scale model.

There is also a growing interest in members exchanging their CG models. This has been made easier by the addition of a dedicated CG Downloads area, (on the Forum), where members who have produced models can share their work and also download other members' CG models to try out. These downloads are not limited to just the Dalek models. There are also files containing scenery and other Dalek apparel, which can be used to create sets in which to feature the Daleks.

You can check out some of the work done by our members in the Virtual Daleks showcase, here. There is also a dedicated discussion area, over on the Forum, where members can discuss their work and offer suggestions and help to other members working in the virtual Dalek universe.